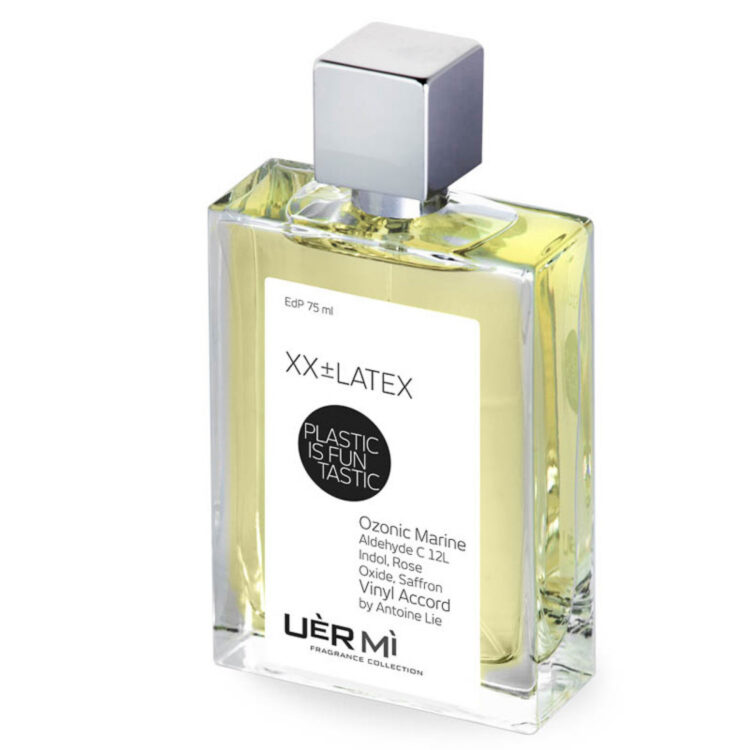 Not a fabric but a material that’s almost like a ‘liquid skin’, latex is a exquisitely surreal association to a playful, ironic erotism. This fragrance is a lighthearted celebration of rare, futuristic molecules that become real on a skin.

The most interesting ozonic/marine scent I’ve ever tried. Antoine Lie is the author of some of the most discussed and controversial fragrances launched in recent years, some of which share an ozonic base recognizably from him. Knowing his previous works I was expecting something challenging and unusual and in fact the starting is actually marine, that is fresh, airy, salty, with a feeling of cleanliness and simplicity – typical of all the fragrances in this family – due to the brilliance of the aldehydes, the freshness of marine notes (they’re white musks) and the pungent feeling of the rose oxide. The contemporary idea of “clean” scents! But while other marine/ozonic fragrances feature aromatic or spicy notes, thus choosing more pungent, fresh or flowery directions, here a strange sweetness emerges, recalling something sensual and weird. It’s a spectacular note of indole, which here is finally celebrated as the olfactory masterpiece it really is. This indolic note, with its decadent charm (it’s the smell of decomposing flowers) stimulates some areas of the brain with a magnetic, irresistible force, commanding you to come closer. Paired to the ozonic feeling, all clean and “harmless”, it gives the composition an unusual and intriguing appeal, like those carnivorous plants attracting insects with their vertigo of sweetness, and then closing on them in a deadly embrace. Or, to put it in a more romantic way, like Richard Gere and Valérie Kaprinski kissing in the pool, in the film “Breathless”.This is without doubts the most sensual and “animal” among all the ozonic scents I’ve ever tried; it starts delicate but acquires intensity and boldness as minutes pass. Unexpected, unlike any other, truly remarkable.”